The bacteria and flora of the Hévíz Spa 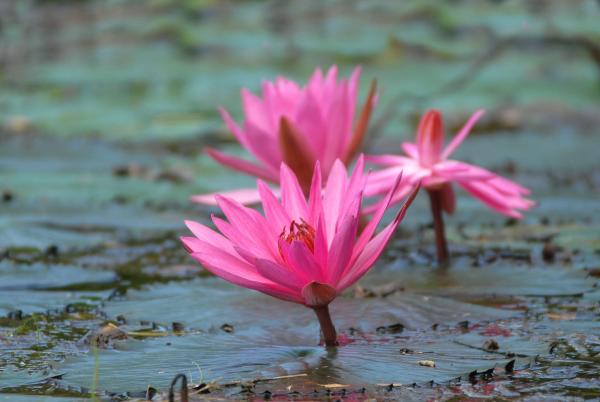 The bacteria are dominant elemnets of the fauna of the lake and they are also connected with its healing power. A number of bacterium groups can be found in the water. The thread blue-green algae are typical cyanobacterium strain (Oscillatoria princeps, O. tenuis, O. jasoruensis, O. chlorina, Spirulina major). It is a characteristic feature that half of the blue-green algae consists of stenotherm species. Two stenotherm blue-green algae can not be found elswhere in Hungary (Pseudanabaena papillaterminata, P. crassa, Anomoeoneis serians)
The bacterial coatings are typical formations of the Hévíz Lake; the wall of its crater is covered by mainly Thiothrix sp. and Beggiotoa sp. coating from a depth of 1.5m to the mouth of the spring cave. Together with other sulphurous bacteria they play an important role in the sulphur metabolism of the lake {Sulphurous bacteria (Beggiatoa minima, B. alba), supphur oxidants (Thiobacillus sp.), sulphate reducers (Desulfovibrio sp.)}. The Aktinomicaeta are also important (Streptomyces sp., Micromonospora sp.), of which the Micromonospora heviziensis having potent protein and cellulose decomposing power is unique in the world while the Microbispora amethystogenes accumulating iodine crystals in its cells can be found only in a couple of lakes worldwide. Due to the mining activity this bacterium has not been present in the lake from the end of the 1980s.

The major environmental change has affected other bacteria populations as well; i.e. the Micromonospora carbonacea and the M. chalcea could not be detected in the 1990s. On the other hand, the Micromonospora purpureochromogenes became the dominant member of the Aktinomicaeta population, while the M. heviziensis lost ground.
Among the Streptomyces bacteria there might be antibiotics producing species.

Except for the environs of the spring cave there are Chlorella green algae species everywhere in the lake.

From among the Diatoms the Navicula cryptocephala és a N. capitatoradiata often appear in the lake.
The fitoplankton of the Hévíz Lake is extremely poor in species; its bio-mass is small, consequently, the trophity rate of the lake changes within the oligotroph-mezotroph range.

Major higher plants in the lake:
- A long flowered sub-species of the Indian red water lilly (Nymphaea rubra var. longiflora)
It was Lovassy Sándor who managed to domesticise it in the Hévíz Lake in 1898. This plant originates from the trophical East-India.
In Hévíz the Indian red water lilly propagates itself vegetatively. A root nodule lives for 6 yeas while developing daughter rhizomes (the organ of the vegetativ propagation) aboundantly. An undisturbed stem develops 10-20 leaves during the summer. Its cyclamen red floweres recalling the fragrance of the cedar tree float 5-7cm over the water. They bloom late at night and their petals close next morning around 11. They start to bloom in June and while growing in intensity they reach the highlight of blooming in August and September the becoming less intense until November. The red water lilly, like most of the trophical plants, is sensitive. It prefers undistrubed conditions and stable climate. A plant blooms for three days.
The red water lilly is a protected plant; it is forbidden to disturb it and to pick its flowers. A mutant with white-pink flower has also appeared in the lake recently.
- The white water lilly (Nymphaea candida minor) has become extinct from the lake but it still strives in the draning canal.
- The bulrush (Schoenoplectus litoralis) is a relict plant from the tertiary period, with thick stock along the canal together with reed. It is a potencial "red-book" species.
- Hungarian ash (Fraxinus angustifolia ssp. pannonica)
is a typical regional, often planted species of the hard-wood forest-groves.
- Swamp cypress (Taxodium diistichum)
It is a decorative, fresh-green ornamental tree with a loose foliage of Northern American origin. It has considerable stock in Héviz with lines along several roads.

Several water plants and ornamental plants have been introduced to the area.

The plane-tree (Platanus x hispanica) alley along the promenade, which can already be seen on photograps taken at the beginning of the 20th century, and their near-contemporaries (ash - Fraxinus ang. ssp. pannonica, swamp cypress - Taxodium distichum, dawn redwood - Metasequoia glyptostroboides, and species of the Abies and Picea genuses are all significant.