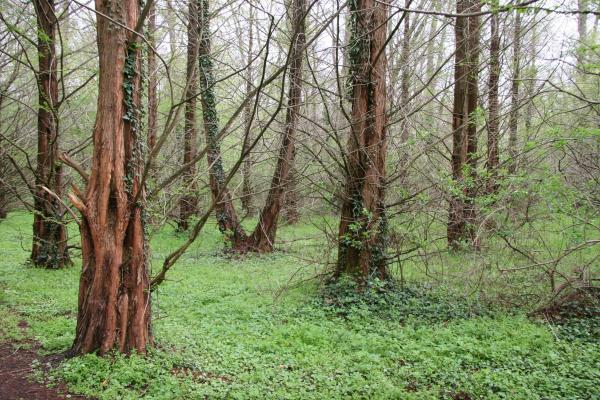 The bogy basin of Hévíz geobotanically belongs to the Saladiense of the Praeillyricum of the Pannonicum.
The lake of Hévíz and the sorrounding marshy and boggy area show an organic hydrogeological, ecological and geobotanic unit. The human intervention already dominate the original natural components.

The natural forest communities were replaced by artificial forests - a process started in the 1910s. A well inlaid by smooth stones in the eastern protective forest and a drinking trough reflect former meadow cultivation. At the end of the 1950s poplar (Populus alba) was planted followed by a common alder stock (Alnus glutinosa) after its celaring in 1992 . The alder was mixed with Hungarian ash (Fraxinus angustifolia ssp. pannonica), domestic poplar and willow species. At the shrub stratum the miller (Padus avium) and the elderberry (Sambucus nigra) create communities. At the semi-wet places of the grass stratum giant soldenrod (Solidago gigantea), wild hemp (Cannabis sativa), black nightshade (Solanum nigrum), fleabane (Erigeron canadensis), plantain (Plantago maior), mapleleaf goosefoot (Chenopodium hybridum), white goosefoot (Ch. album), marshpepper knotweed (Polygonum hydropiper), hemp nettle (Galeopsis speciosa), tansy (Tanacetum vulgare), while at wet spaces water mint (Mentha aquatica) and tufted hairgrass (Deschampsia caespitosa) can be found. The ivy (Hedera helix) is widespread at both places. With the exception of the renewed stocks there are old, artificially planted and unmixed common alder (Alnus glutinosa) stocks in most parts of the area.

The cimatic effects together with the hydrogeologic conditions of the lake and its environs are the key factors influencing the nature of the plant stock of the park and at the same time they help to maintain a specific plant stock similar to the arboretums. This special condition is only partly utilised in the park especially through the water lillies of the lake and the plants of the tree stock with special needs (Metasequoia glyptostroboides, Taxodium distichum.

The park does not have any natural vegetation, so its significance can be seen in its old plant stock with rarities, its special conditions and history.