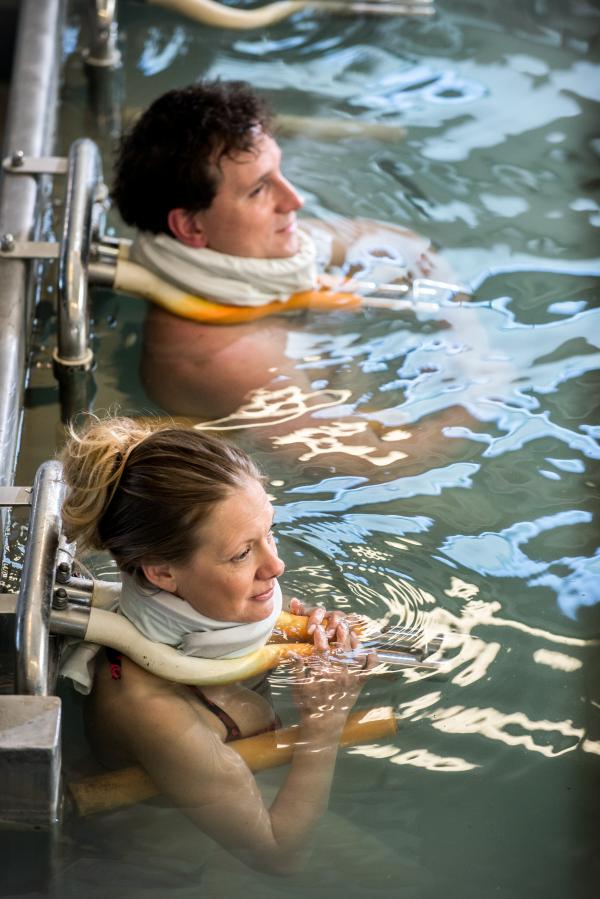 The underwater traction bath or weight bath was invented by head physician dr. Károly Moll (the famous physician of the Hungarian balneotherapy).

Traction and extension treatments have been used since the age of Hippocrates.
The application of traction treatments right after bathing yields more effective therapeutic effects. The reason for that is that hot water relaxes the muscles, and therefore the pulling (tractive) force can be exerted at the adequate locations in the body (i.e. joints) and it will not be absorbed by the muscles.
This gave Károly Moll the idea to establish a therapy, where the treatment’s setting is in the water. He was helped by his patients’ experience. Regarding that Lake Hévíz is a deep lake, there are several handrails and grab ropes for safe bathing and for the guests to allow them to have a rest while swimming. Patients often did not follow the recommended bathing time; moreover, they passed time and kept talking to each other while holding the handrails in the water. In the meantime, they recognized that their pain decreased and they reported that to their physician, dr. Károly Moll.
The underwater weight bath’s first model was created on a spring morning in 1953.
This device had proved its worth and the patients found it effective. Even two of these devices had been built due to increasing need for traction therapy. However, these two devices could not provide enough capacity, therefore, on the lake there had been built a weight traction system for the use of eight and later for fifty person.

Years later, the weight bath therapy became widespread throughout the country. It has been applied since in various therapy centers with great results.

Three body areas can be treated with this therapy: the area of the knees, hips and spine. In case of knees and hips the decreased range of motion can be treated, which is caused by contractures in the muscles or ligaments.
In case of the spine, weight traction bath therapy offers a more complex treatment.
It can be used for the prevention and rehabilitation of degenerative disc diseases.
The therapy’s mechanism of action is a traction or pulling of bony structures (the disc between the two adjacent vertebrae) from each other effecting the elongation of the disc, allowing it to recover its original shape and position.

Due to the pulling force, the shrunk ligaments and muscles recover their original length, thus mobility impairment is eliminated. This effect is achieved throughout passive mobilization performed by physiotherapists. Compared to other therapies by using underwater weight traction the joint surfaces are unloaded, therefore, the pulling (traction) of the joints is a painless motion.

Nowadays, practice-based therapy is aligned with the requirements of evidence-based therapy (based on peer-reviewed scientific evidence). Several scientific research and studies have been conducted via randomized, controlled trial design. The pulling (tractive) force was measured with ultrasound, MRI (magnetic resonance imaging) and a spineliner device.