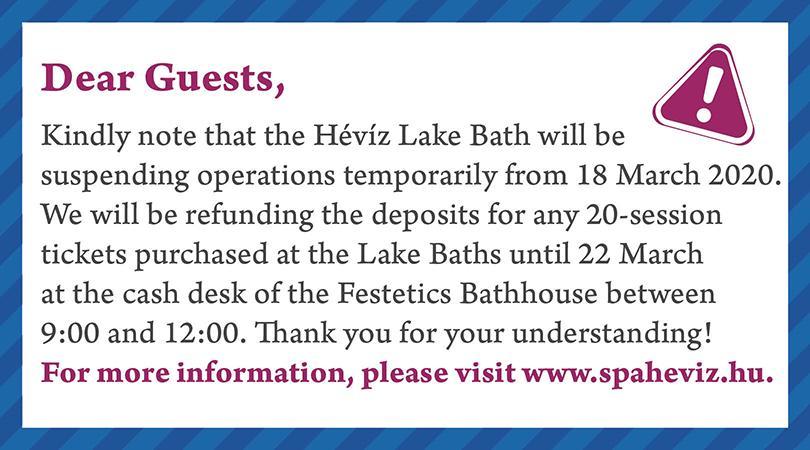 The initial Medicinal Bath in Hévíz

Present day bath and spa of Hévíz comprise the former villages of Hévízszentandrás and Egregy. Szent-András-Páh was formerly known as Hévízszentandrás. The denomination ‘Páh’ comes from the verb ‘páhol’ (beat) and is connected with the tanner occupation, one of the steps of the tanning process is still called ‘páholás’ (beating). Several heavy iron weights were found in Lake Hévíz, which once were used to stretch the skins in the water. The name of the lake was first mentioned in 1328: "locus vulgariter Hewyz dictus". 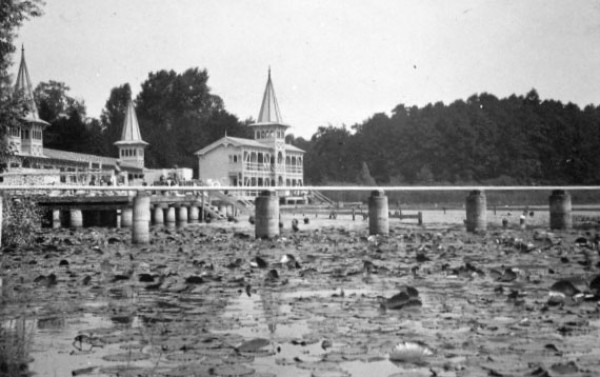 The first, at that time rectangular shaped, building was built above the lake in 1795 by the landowner, Count György Festetics I. The fame of the beneficial effects of the medicinal water also reached Vienna in 1801; an 1818 report already mentioned the presence of white-water lilies in the lake, which were completed with other Indian species in 1898. The afforestation around the lake, the modernization of bathing facilities and the establishment of the lakeside guesthouses began in 1858. In the center of the lake, a so-called mirror bath was placed for the men and women (bath surrounded by cabins); however, many guests used the lake’s much wider water outlet for bathing. The “cupping therapy house” – used for healing was built at the same time as the first bathing building (1795). While in the first half of the 19th century the surrounding area was only reed and swamp, since the 1850s the hotel buildings were more consciously built. In 1870, houses I-VII had been already built, of which House no. 7 was the only double storey building. A Roman Catholic chapel was also built (to be demolished later), and at the beginning of the 1900s the hotels, the bazaar buildings and the "Kúrszalon" were built, which was the place for balls and concerts.
Since 1900, Vencel Reichl tenant made all efforts in order to promote Hévíz as an international spa town. Until the outbreak of the World War I, there was a spectacular development in the medicinal bath and spa, and the number of visitors had doubled. New bath houses were established, with first-class dome-covered mirror baths, cabins, rooms for body wraps (mud pack) and relaxation rooms that were accessible via a covered bridge that led to the elegant main west entrance. In 1911 the city received the "village of spa" title.
After 1926, the developments started again. The characteristic lakeside spa building was built, and in 1932 the main building got a glass roof and became fully covered. In 1930, there were 7 hotels, 11 restaurants and 40 villas in the village, with almost 16,000 visitors on a yearly basis enjoying a diverse cultural life. In these peaceful years the chief physician in Hévíz was dr. Vilmos Schulhof, who established the Zander and Radiology Institute in 1911, which served to meet the needs of the age of exercise therapy (gymnastics and electrotherapy laboratory, X-ray equipment). He worked hard to promote the therapies in Hévíz; today, the promenade along the Lake bath is named after him. Due to the dynamic developments, Hévíz started out to become a well-known spa, to where apart from the Hungarian middle class many visitors came from abroad. The baths' divisions and prices were calculated based on the financial status of the guests.
In 1948 the Festetics owned Lake bath and all related buildings, parks were nationalized and the period of state vacations began. In 1952 the Hévíz State Bath Hospital was established, and that year Hévíz was declared a health resort with national importance.
From 1959 a new era begun with a new director, Dr. Ottó Stecker. He started working with great determination and decided upon the complete modernization of the spa. The plans included renovations, the completion of utilities, the new patient library, the coffeehouse, the winterization of the restaurant and the construction of a new 500-person winter bath. The construction and the renovation began with the László Csány House and its winter bath. Two swimming pools were open for guests after the construction works, but the problems of winter bathing were not completely resolved. The reconstruction of the clinic began and in addition, the long-time missing steam laundry started to work. The renovation of building A (Ella-villa) was completed in the spring of 1961, and so the central heated, 34-bed „hotel like” hospital department was opened, which was designed to serve foreign patients. In the building, a modern Radiology department was established, plus the country's first underwater massage bath (Underwater jet massage/Tangentor) was established here.
In 1964 the kitchen and restaurant serving 150-person were completed, a substantial part of the hospital's interior equipment was replaced and the first musculoskeletal rehabilitation department of the country with 48 hospital beds were opened, where they aimed to help patients with severe motor disability achieve independent living. Professional medical training courses and research work were also part of the physicians' daily lives, and Hévíz became an important base for Hungarian balneology and rheumatology research. The long-awaited plans of the Hévíz State Spa have included the construction of a new winter bath to replace the small, old Lászlo Csány House bath that had been built before the war. The new winter bath was made not only because of the growing tourism, but also because of the need to introduce and apply new therapeutic methods of the developing medicine. The building was completed in 1968 with the latest equipment of balneology. The new institution introduced brand new treatment procedures: carbon baths, water jets, whirlpools, electric bath tubs. News spread in the country that in Hévíz patients received complex therapeutic treatment. During this period, Hévíz's internationally acknowledged rheumatologist, sen. dr. Károly Moll started his work, who was the inventor of weight baths.
In the 70s, tourism grew to the extent /thanks to visitors from Western Europe/ that it necessitated the construction of further quality hotels and the reconstruction of the Lake bath. From 1977 former domed buildings were replaced by larch-lined, tower-like buildings. The complete renovation was completed by 1985, but guests could not enjoy the new facility for long, as it was completely destroyed on March 3, 1986 due to a fire. The new buildings were finally completed in 1989.

The beneficial effects of the sulfuric water of Hévíz were first published in 1780. In the beginning, apart from bathing only phlebotomy was used as a therapy, the sanatorium was only built in 1907 in the settlement. The first famous physician of the town was Vilmos Schulhof, who used electrotherapy and X-ray in the rehabilitation of musculoskeletal disorders. Due to the work of sen. dr. Károly Moll, Hévíz medicine revived from the 1950s and in 1968 the country's most modern balneotherapy bath was built in the city.
Since then the services have expanded with a wide range of treatments, however, the basic principles of traditional medicine in Hévíz are still the following: spa bathing, mud wrap or mud bath, and the weight bath introduced by Károly Moll. These can be supplemented by the consumption of medicinal water, therapeutic massage, physio-, or hydrotherapy, depending on individual needs.

The Medicinal Bath in present days

Lake Hévíz is the world's largest biologically active, natural lake, which offers an open-air bathing experience throughout the year. The water surface is 4.4 hectares and the water’s temperature does not decrease below 22 °C even in winter, however, in summer it reaches 38 °C. The spring of the lake is in a cave, which is located at a depth of 38 m, and the water’s turnover is 3 and a half days due to its discharge flow rate. The lake bottom is covered with 7 meters thick peat/medicinal mud, which is rich in minerals.
The basis of Hévíz spa culture was laid down by the Romans, while the first remarkable bath developments are related to the Festetics family.
Due to its rich mineral content, the special health-preserving power of Lake Hévíz contributes to the treatment of other conditions, rheumatic and musculoskeletal diseases, today, the treatments are complemented by numerous forms of wellness services. 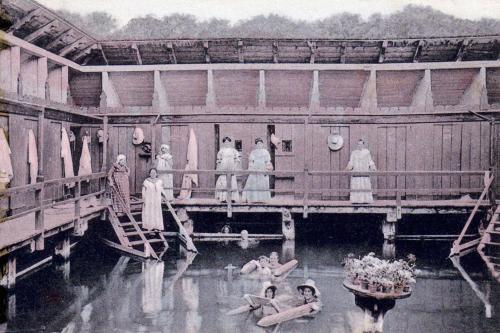 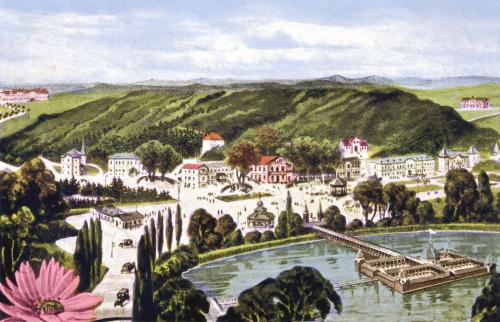 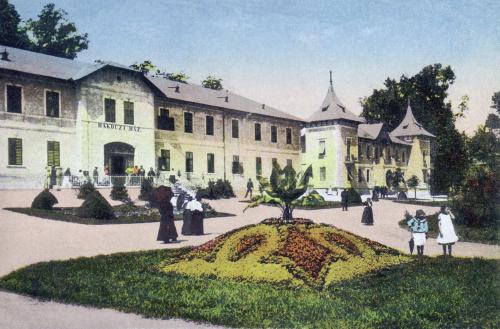 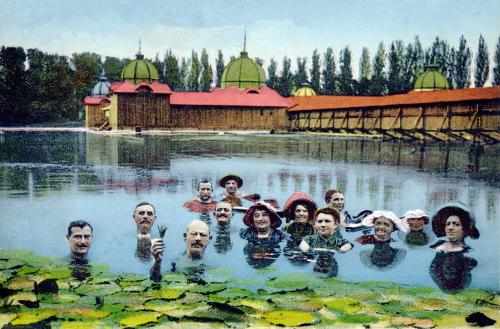 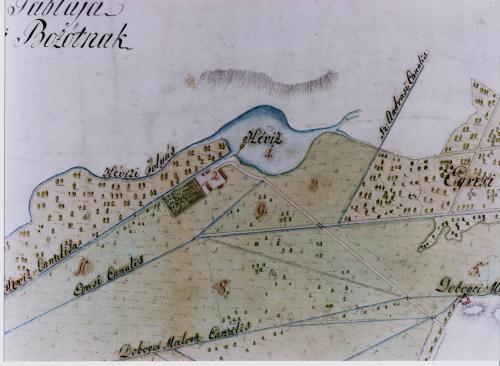 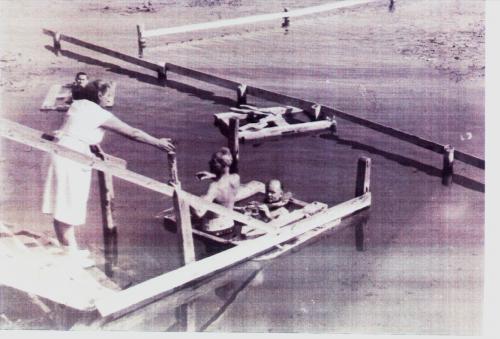 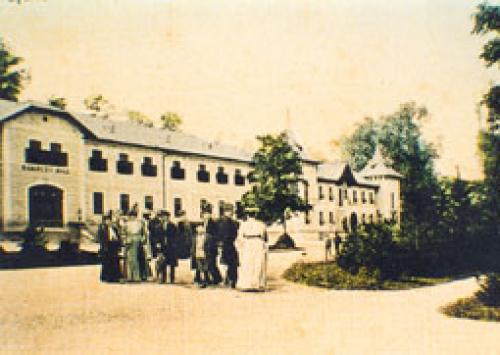 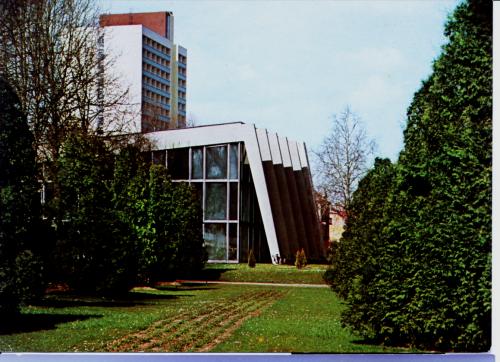 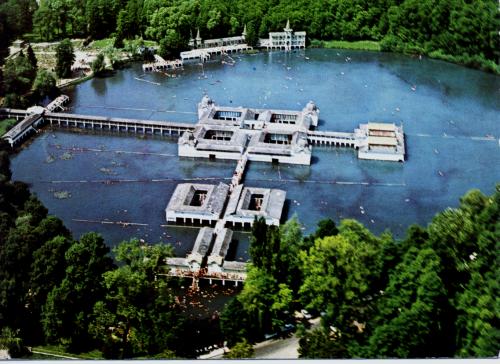